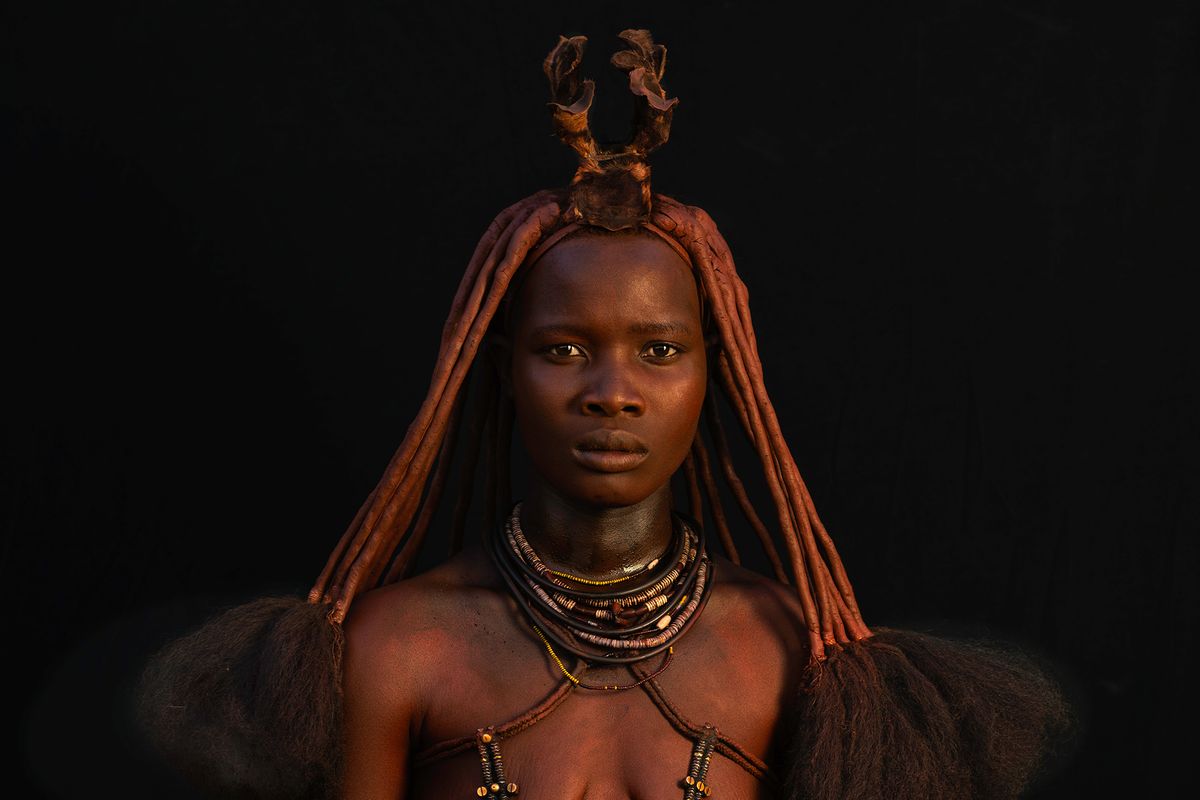 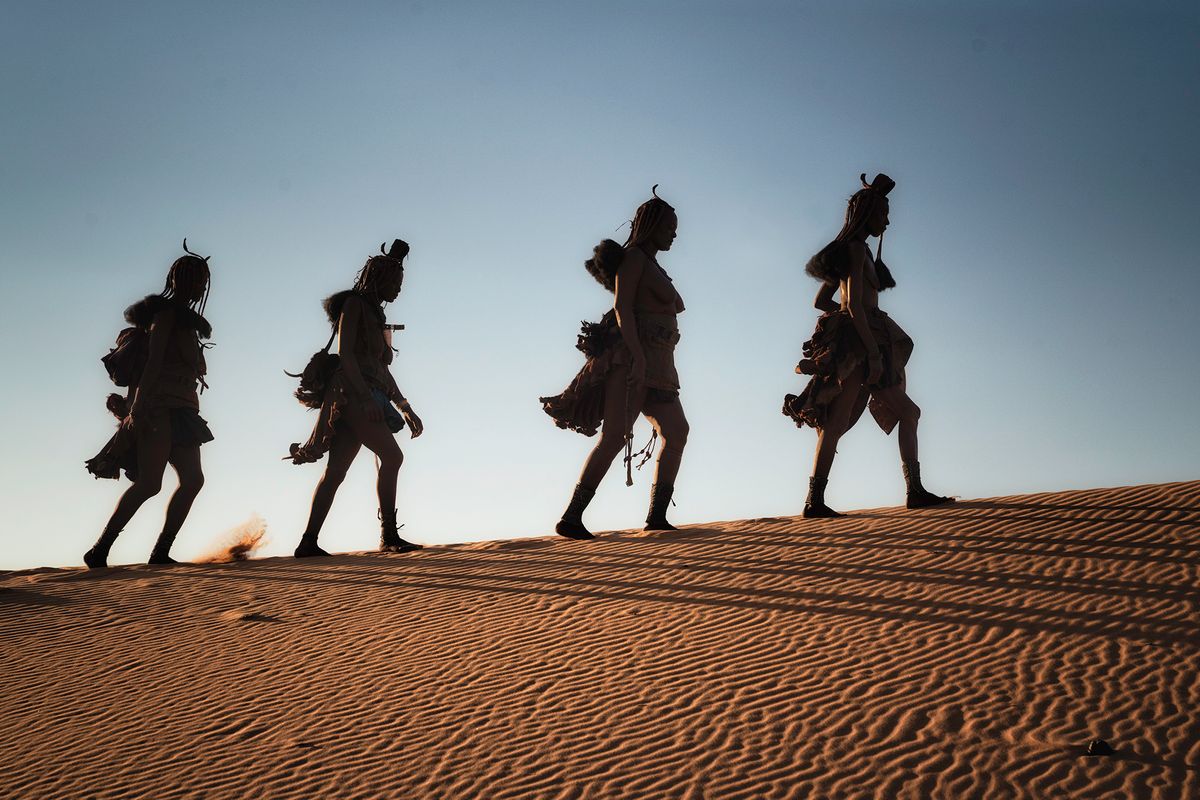 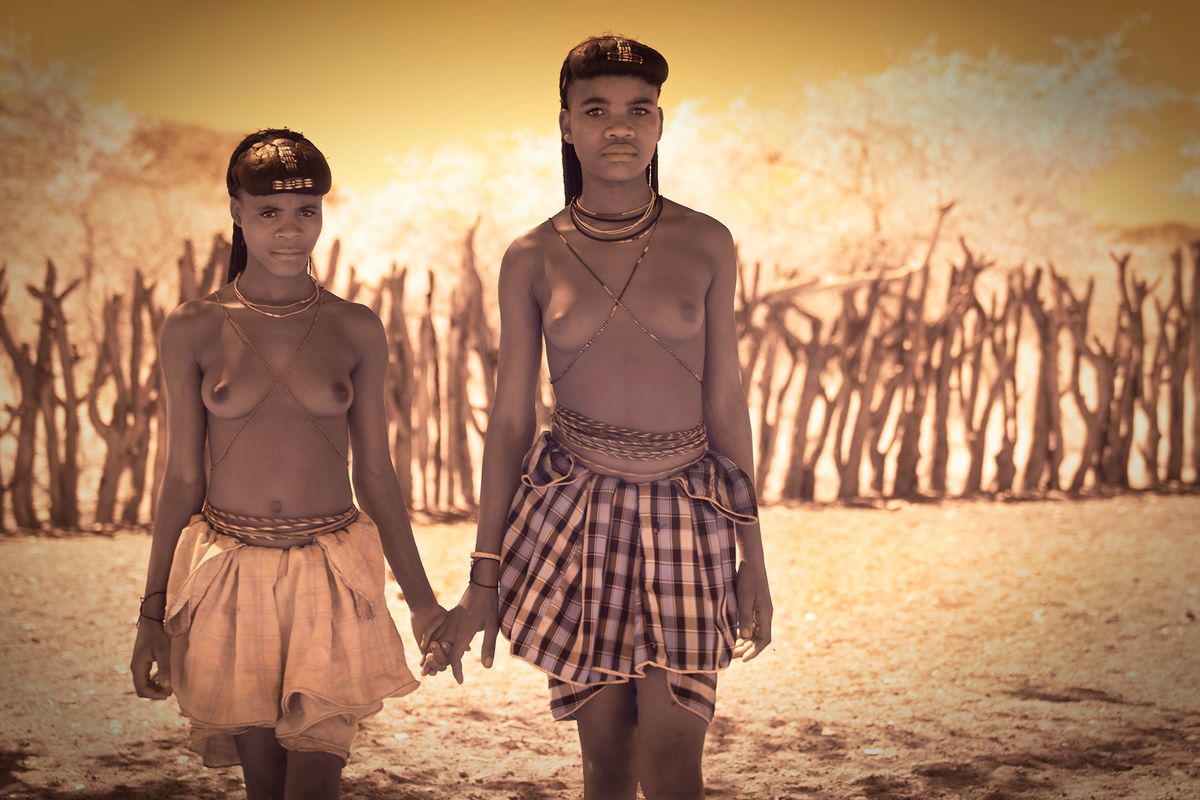 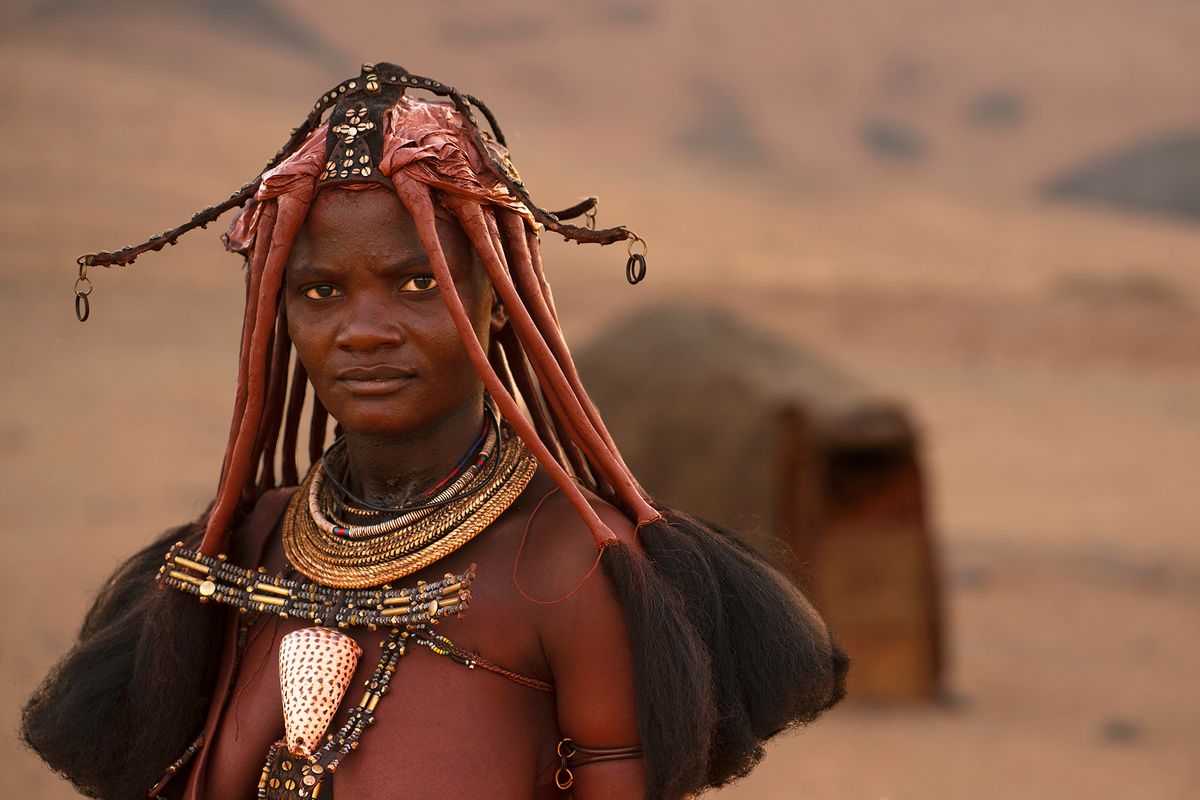 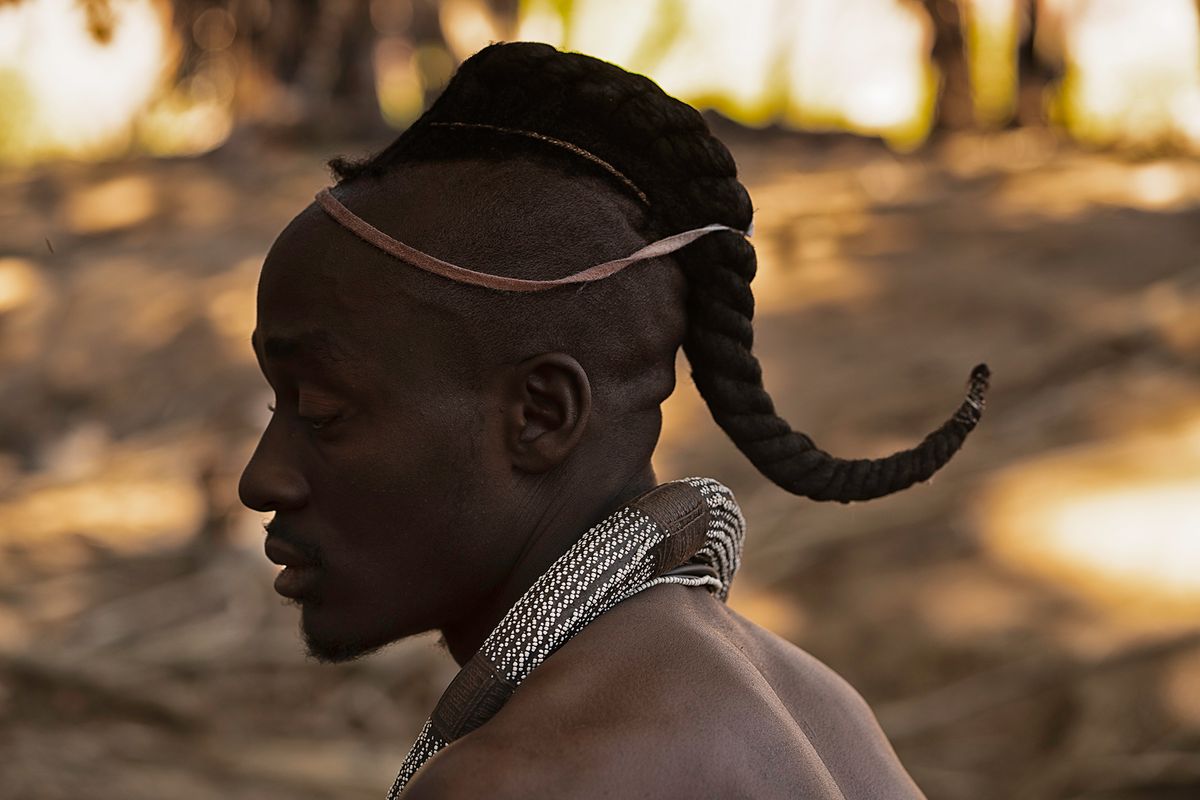 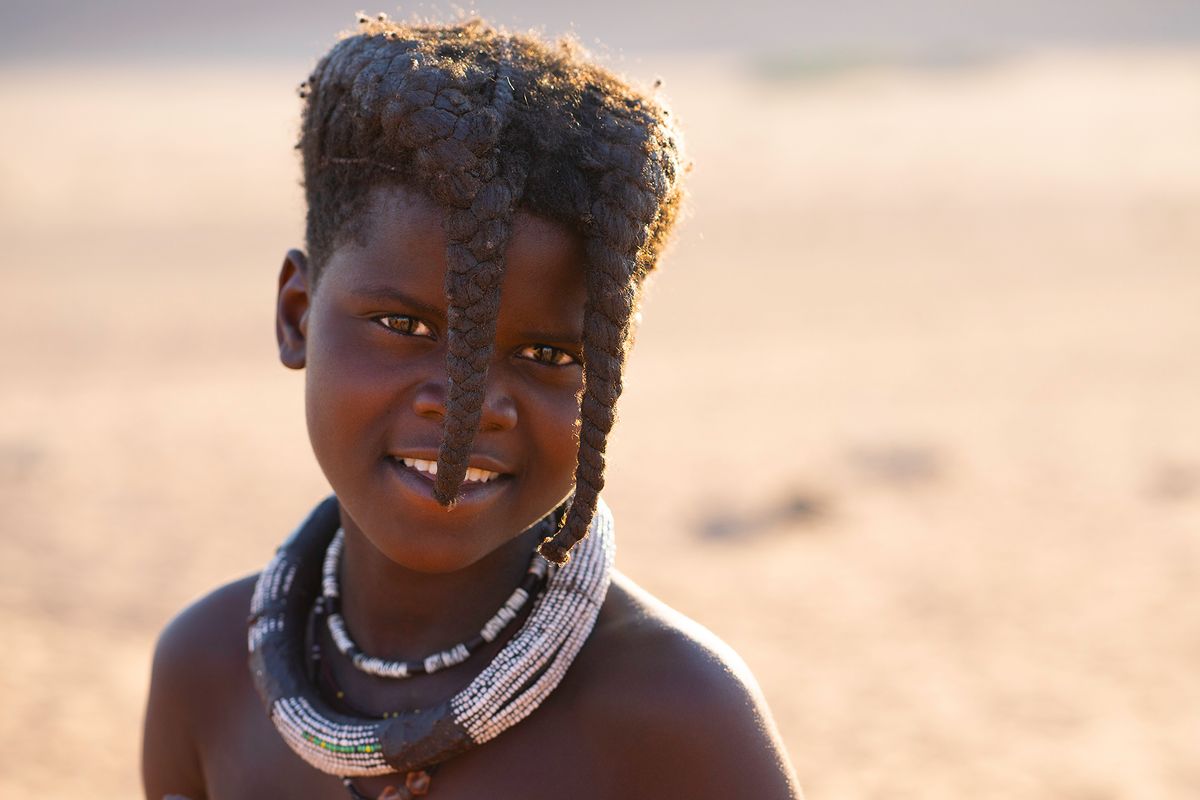 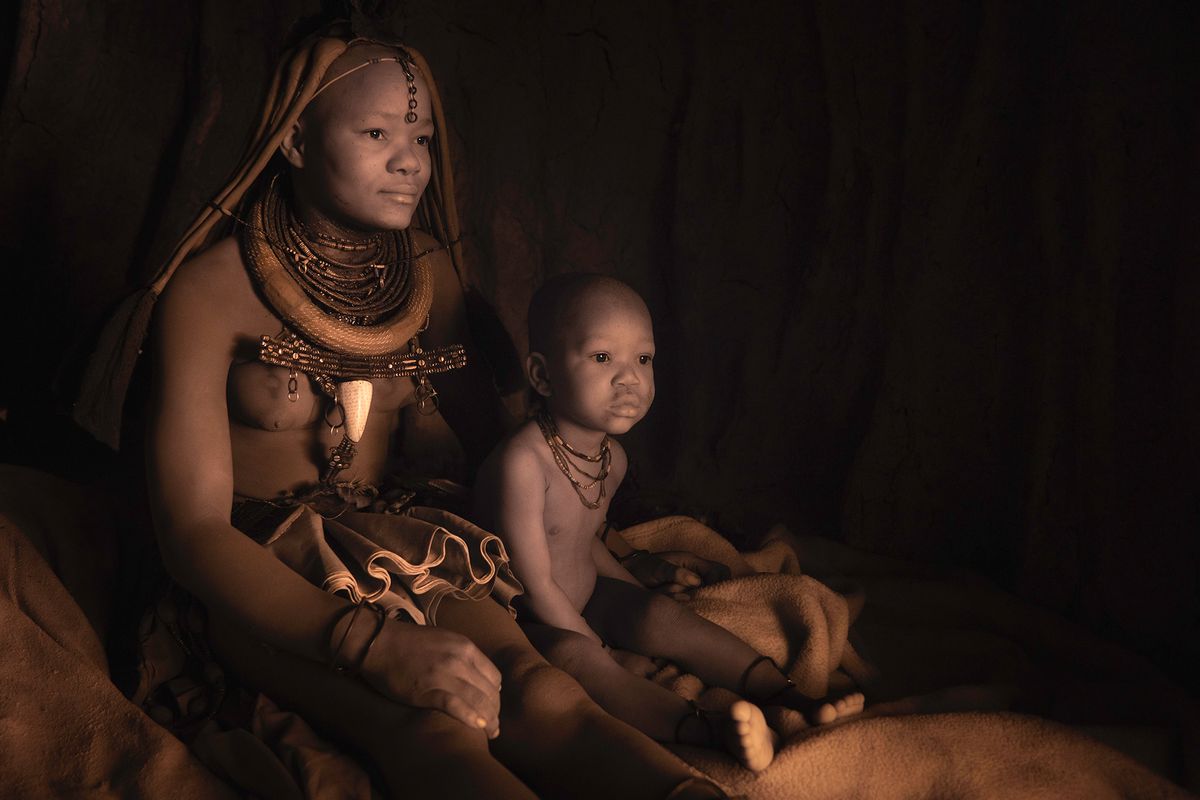 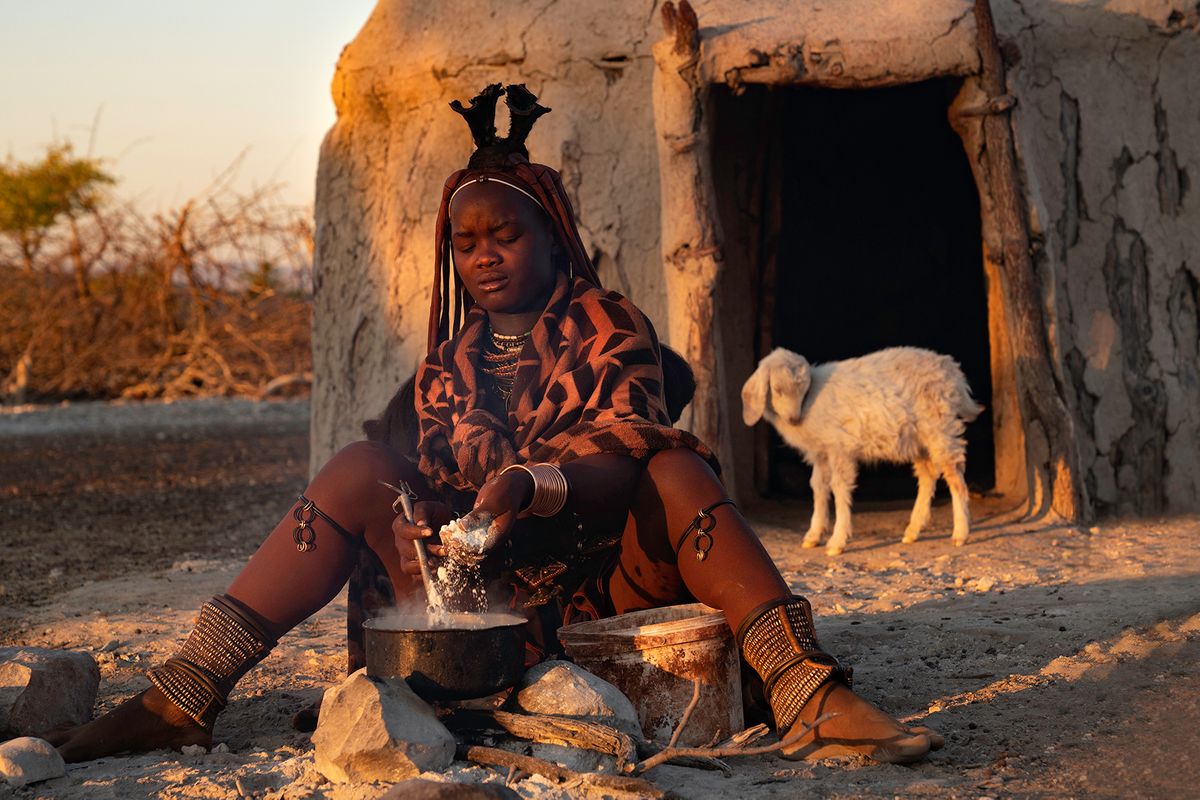 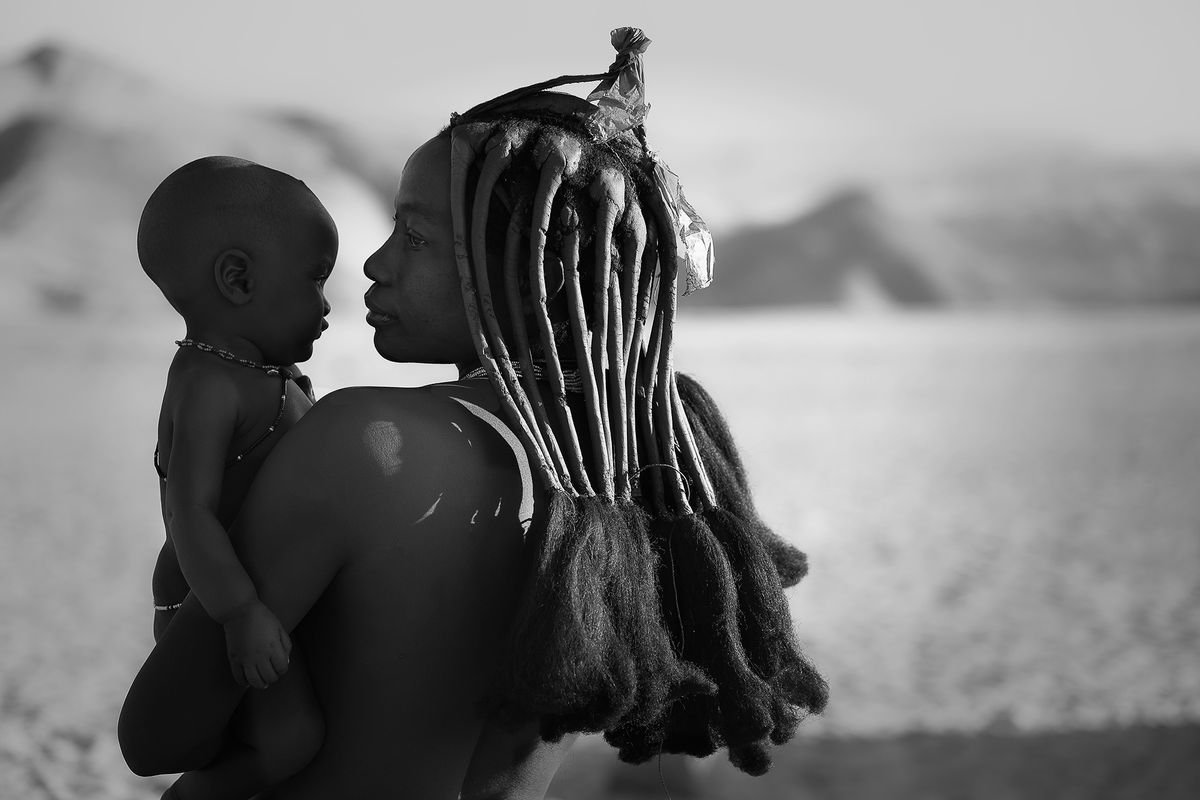 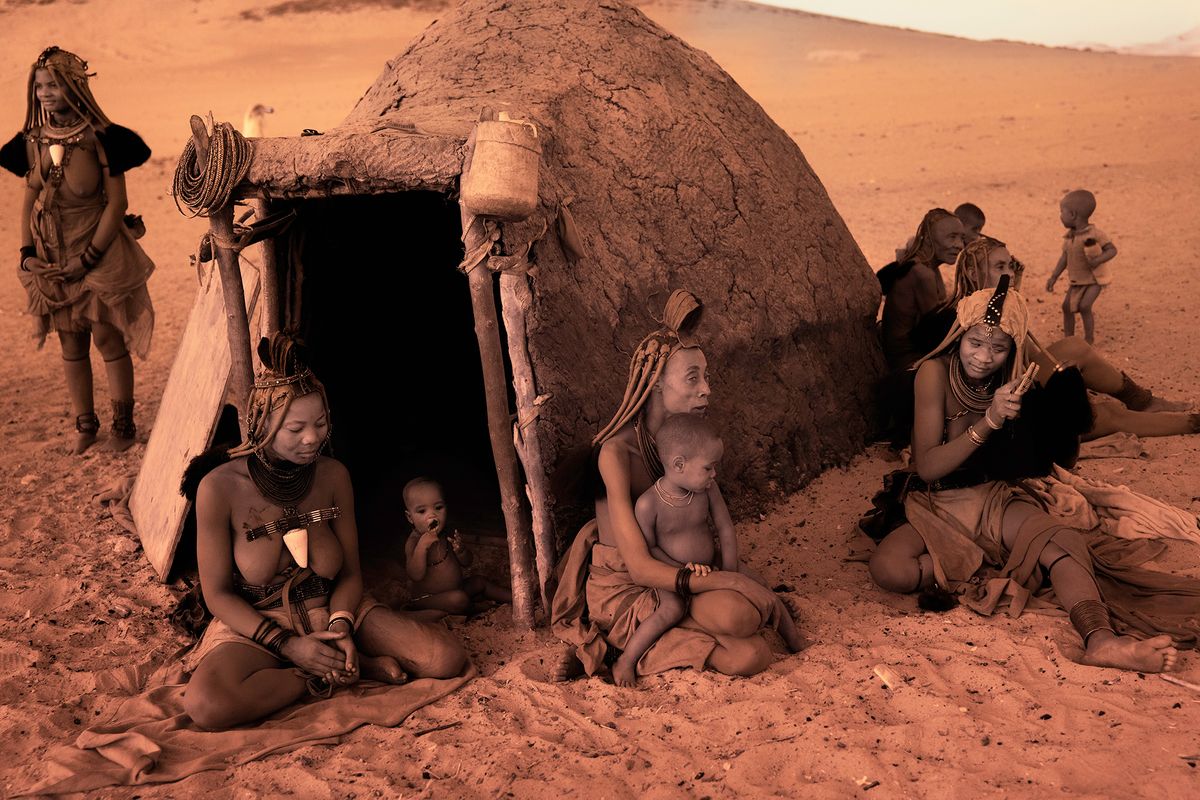 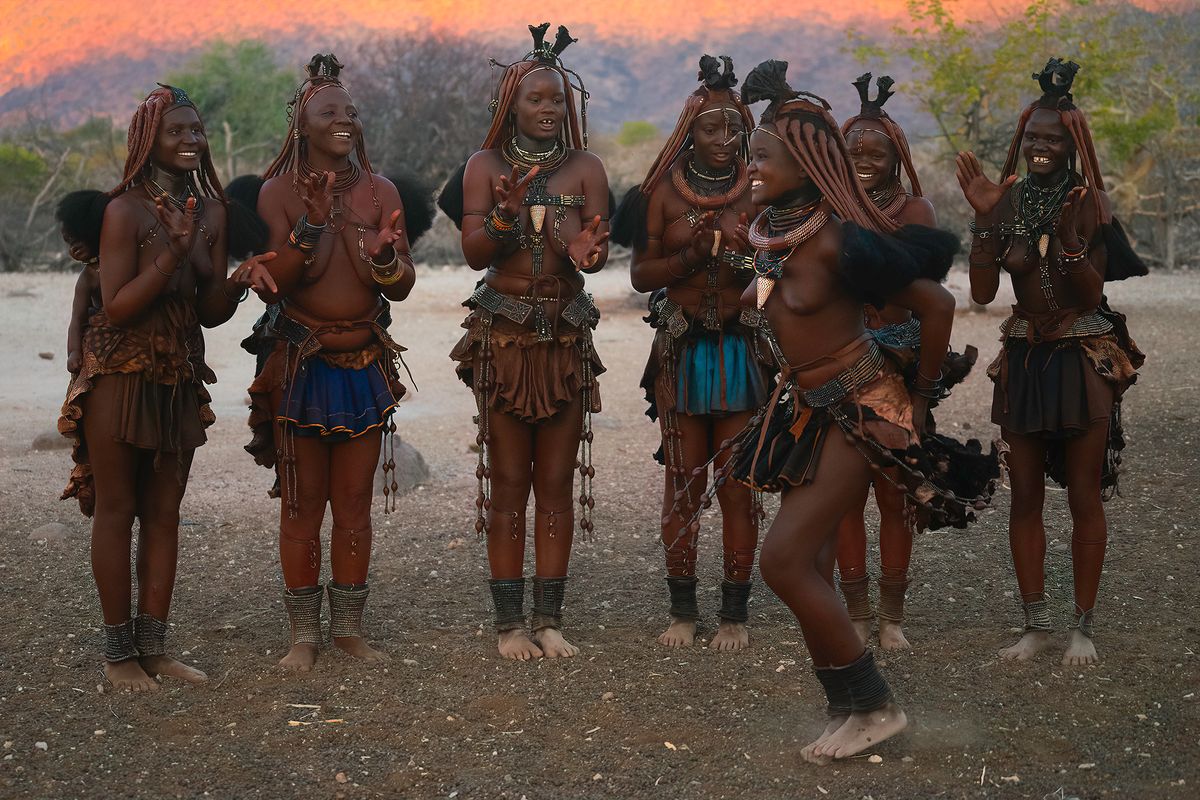 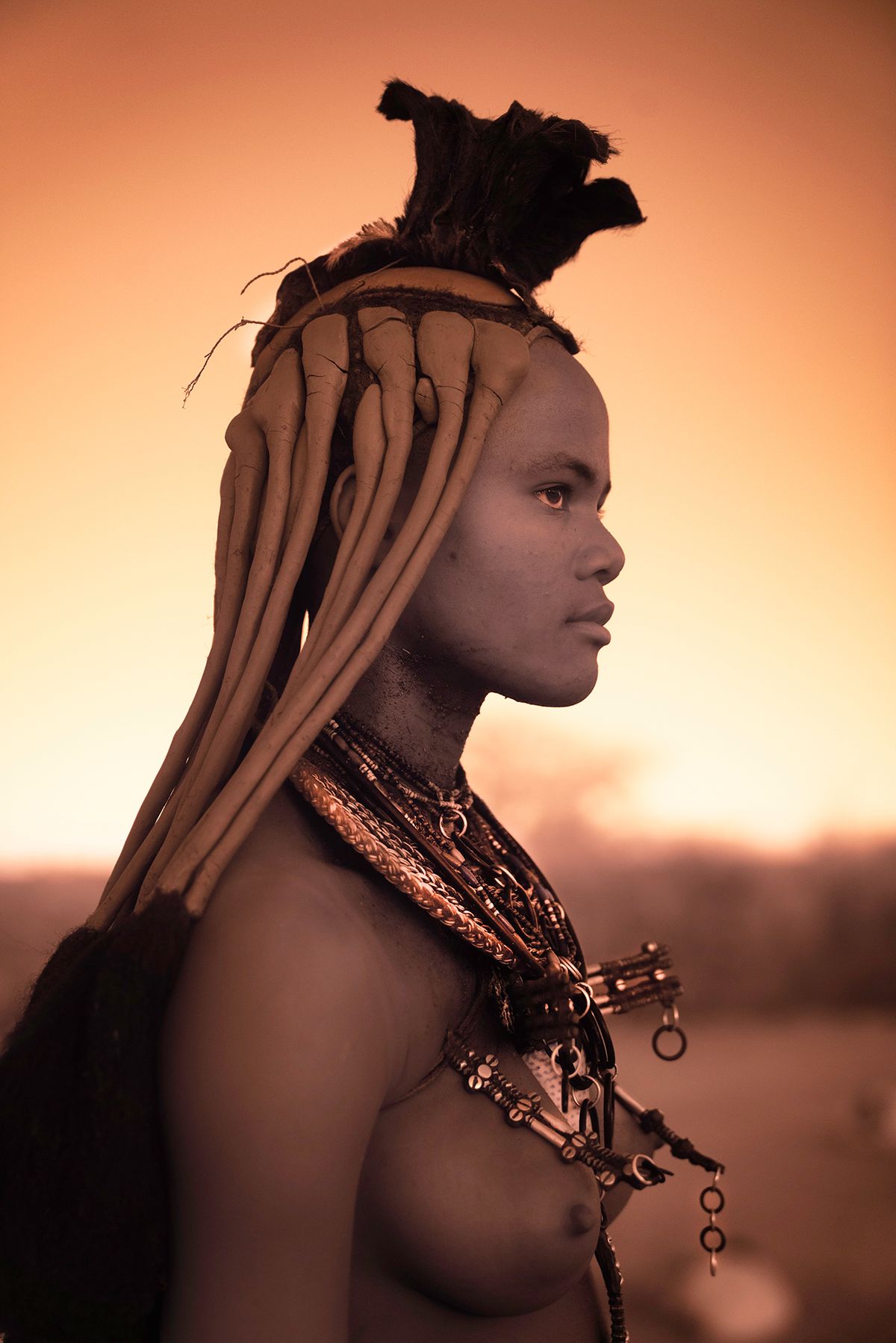 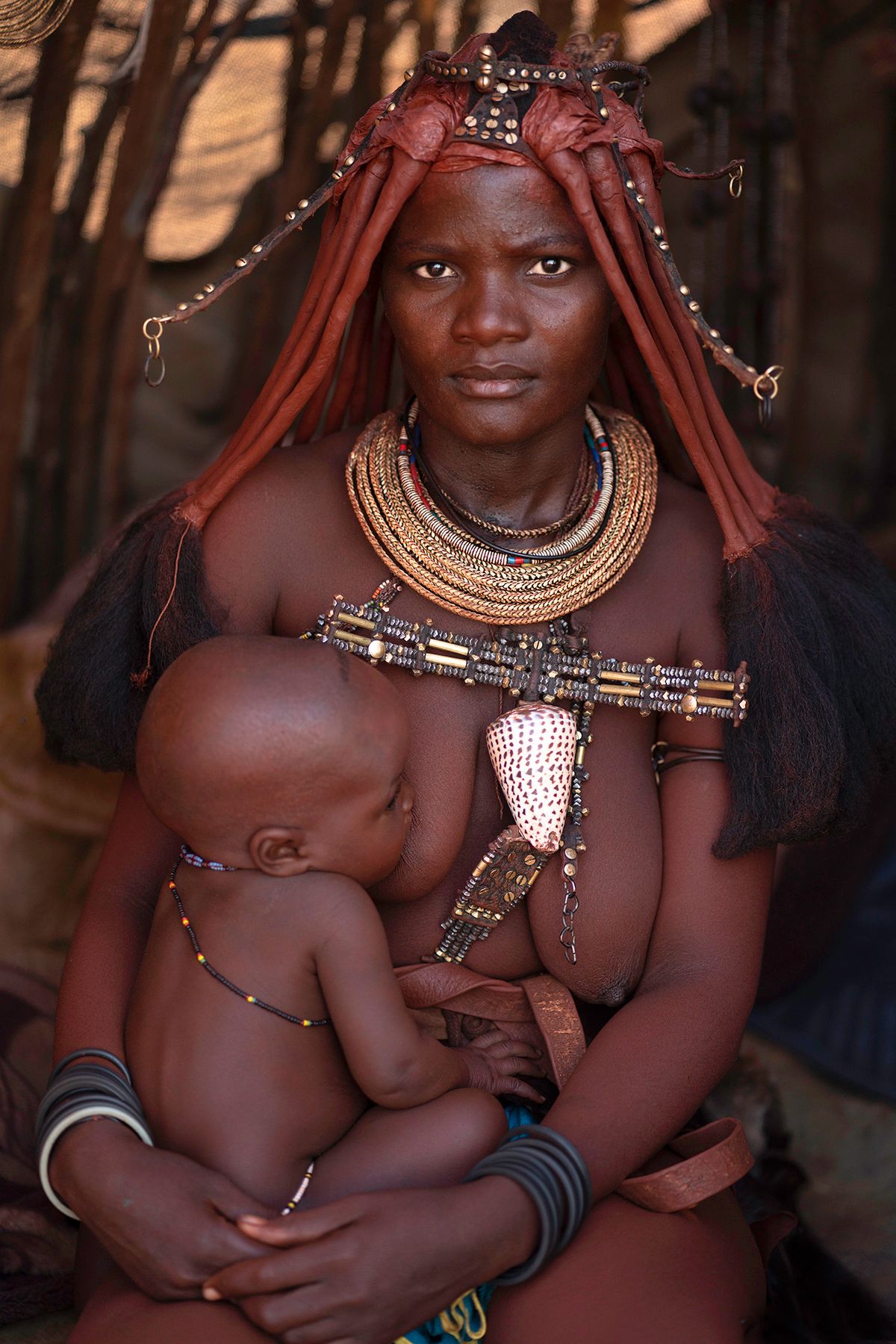 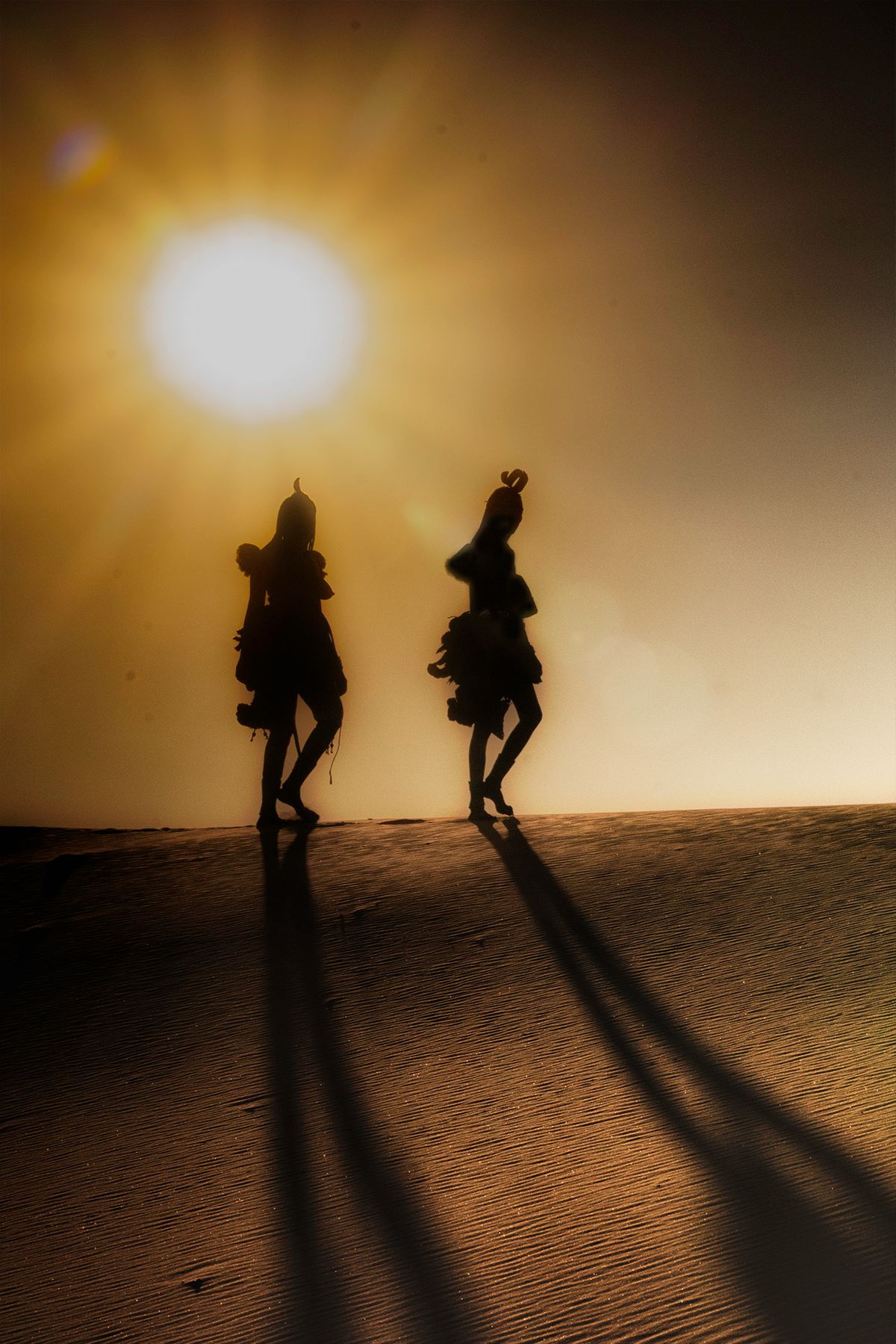 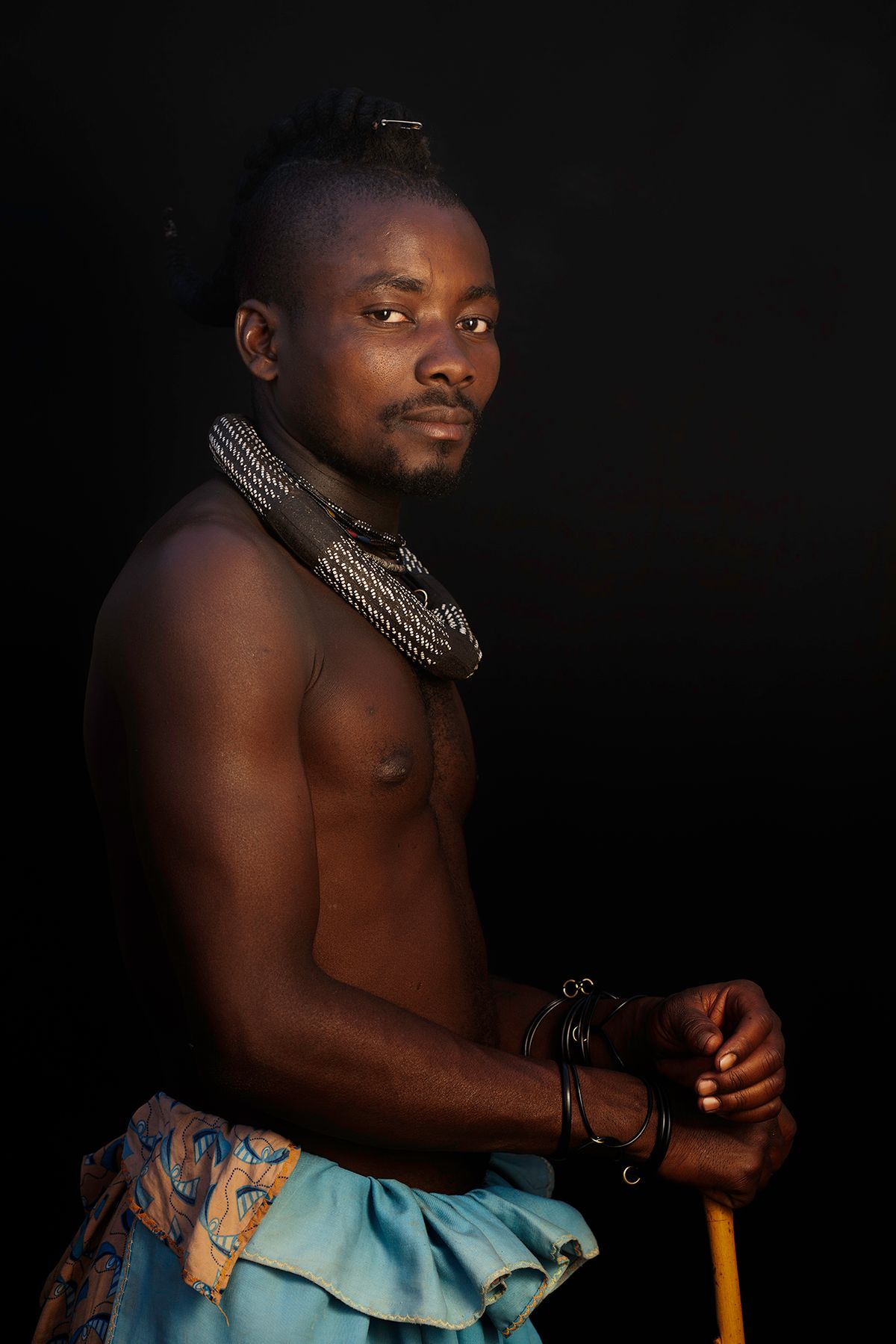 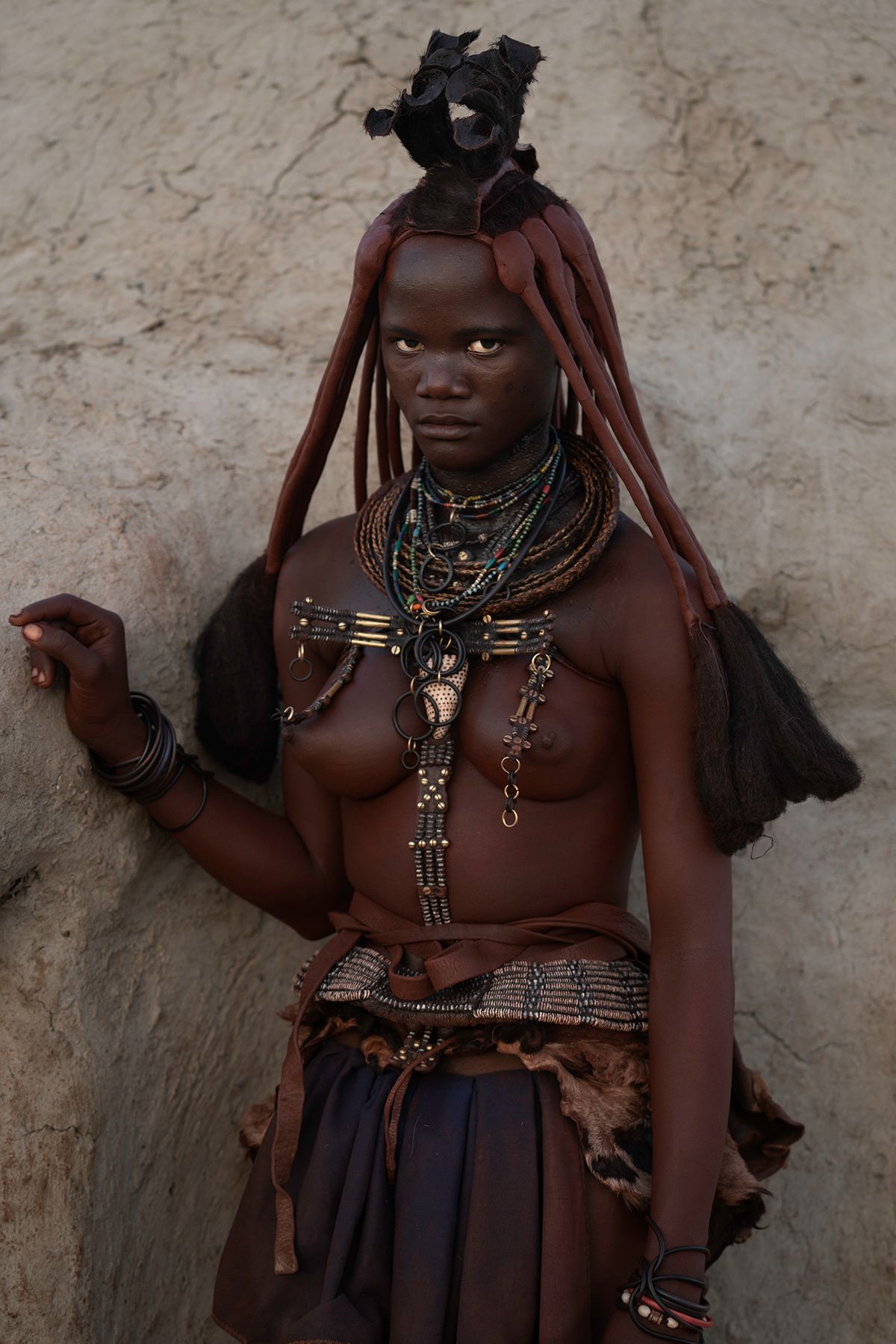 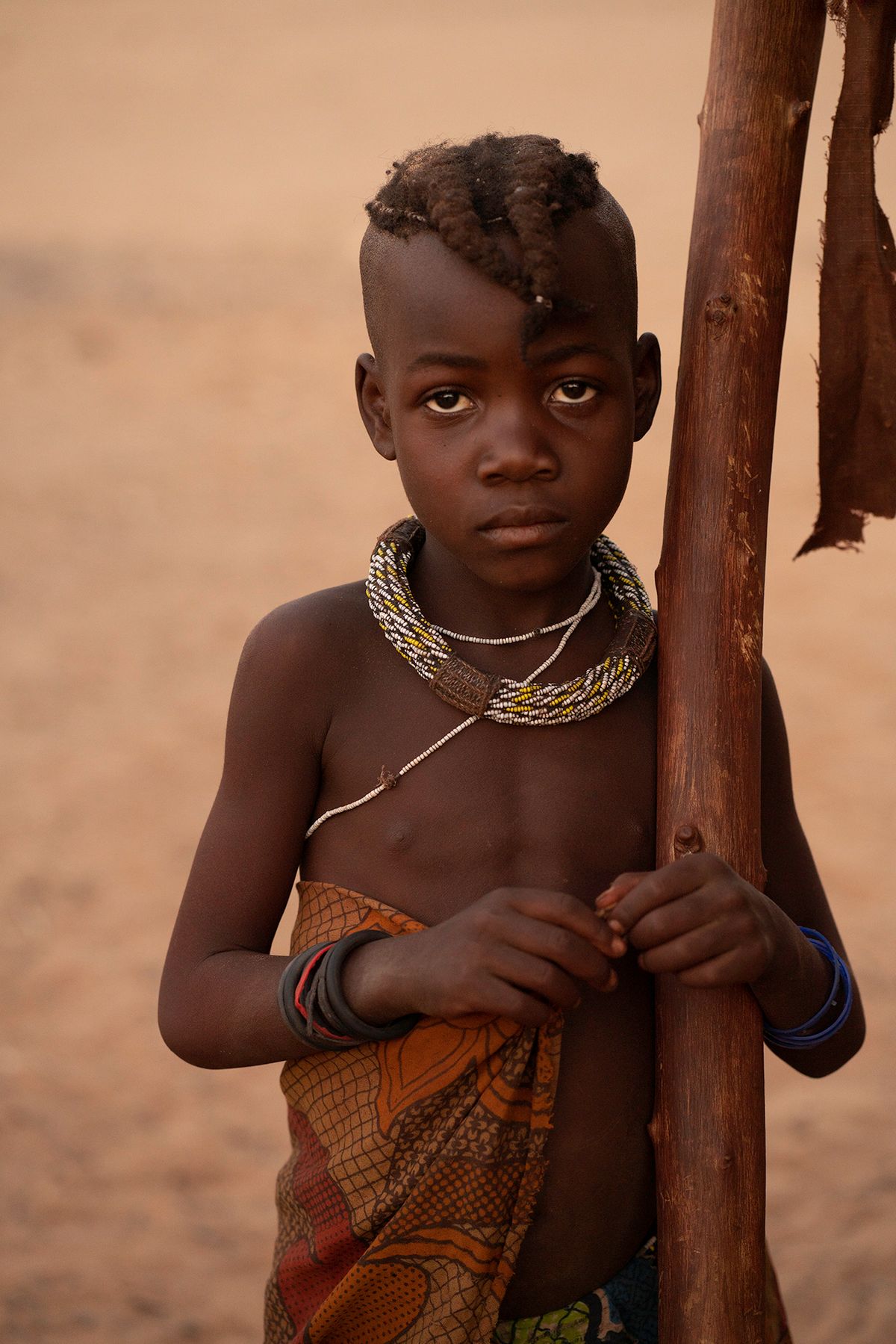 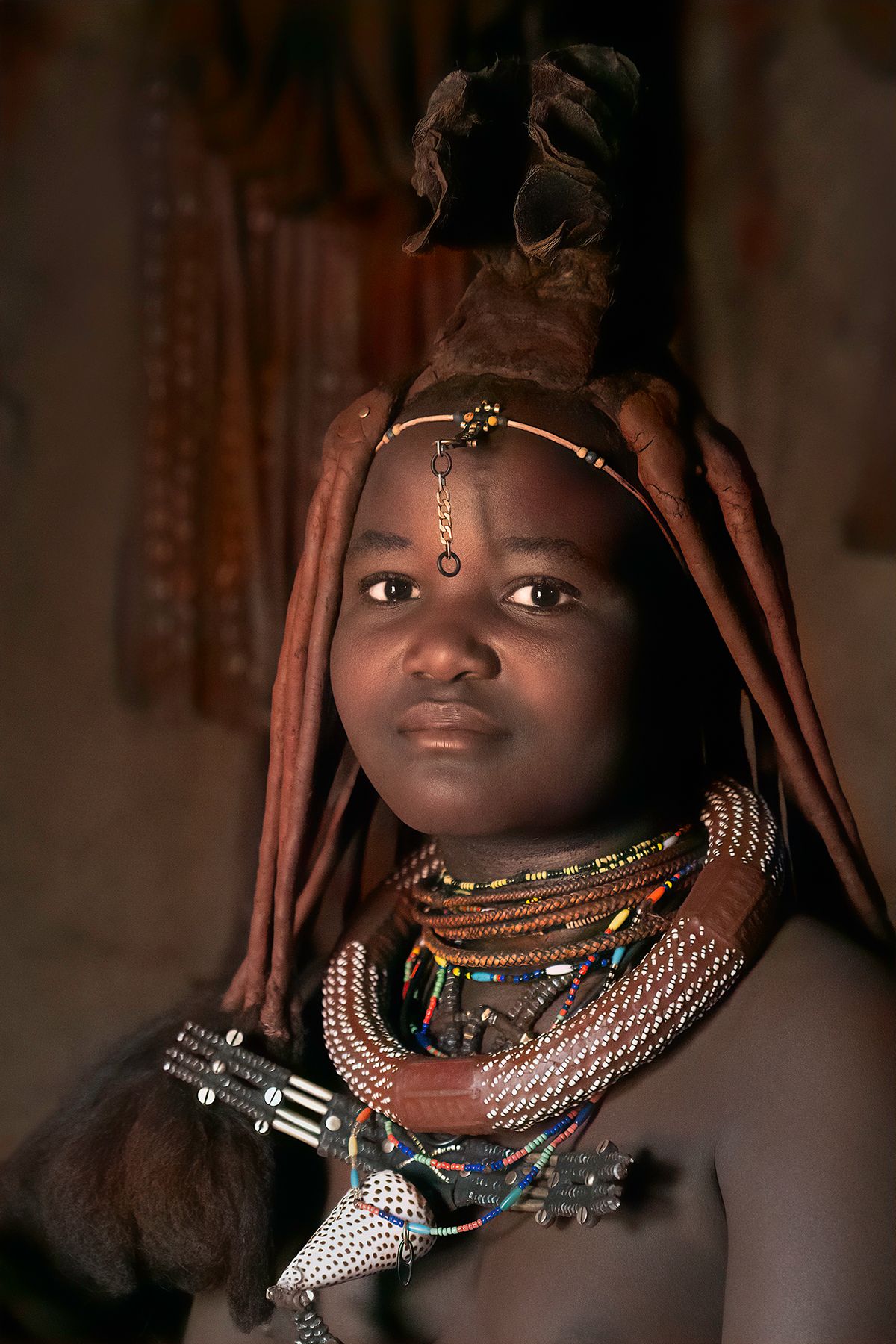 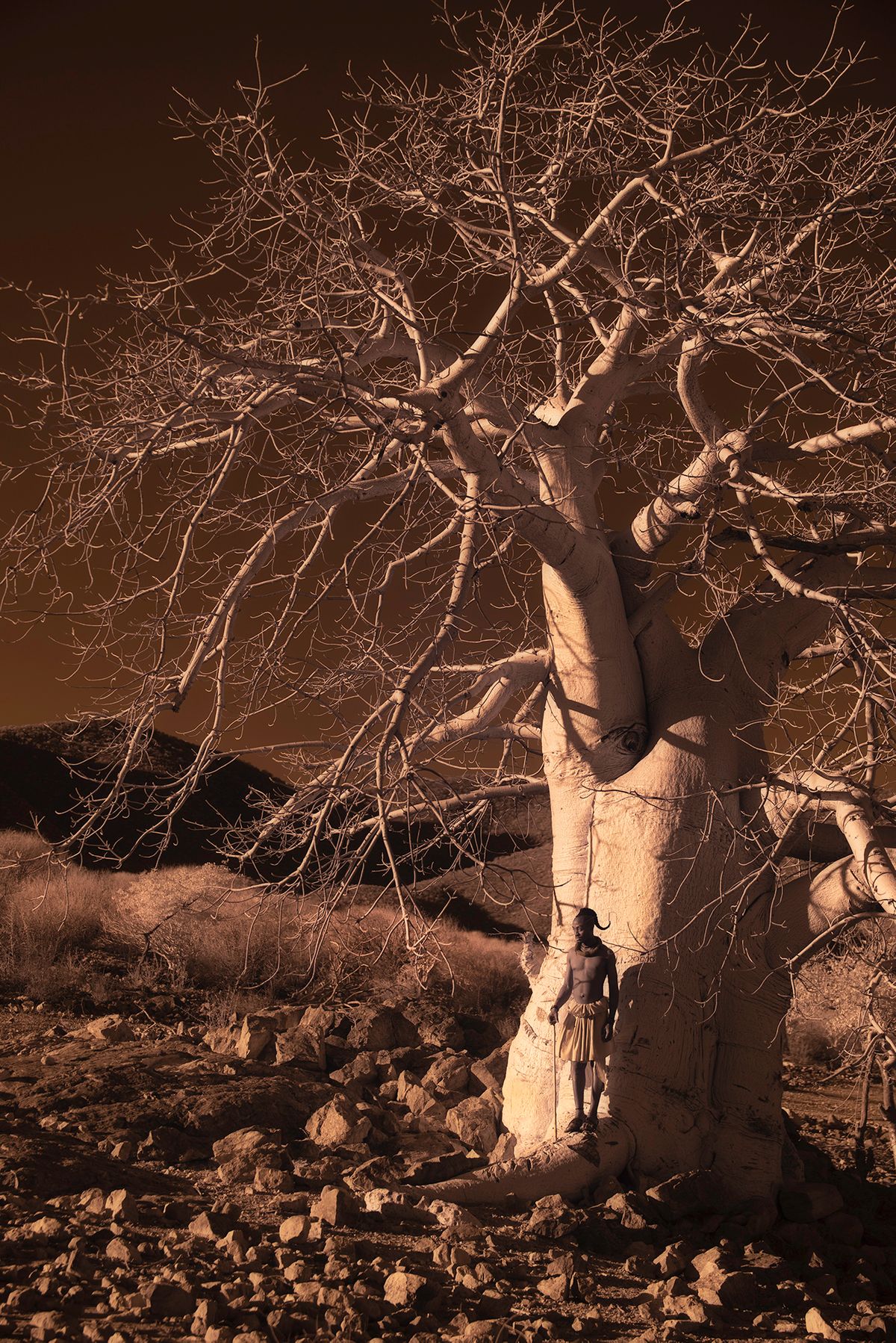 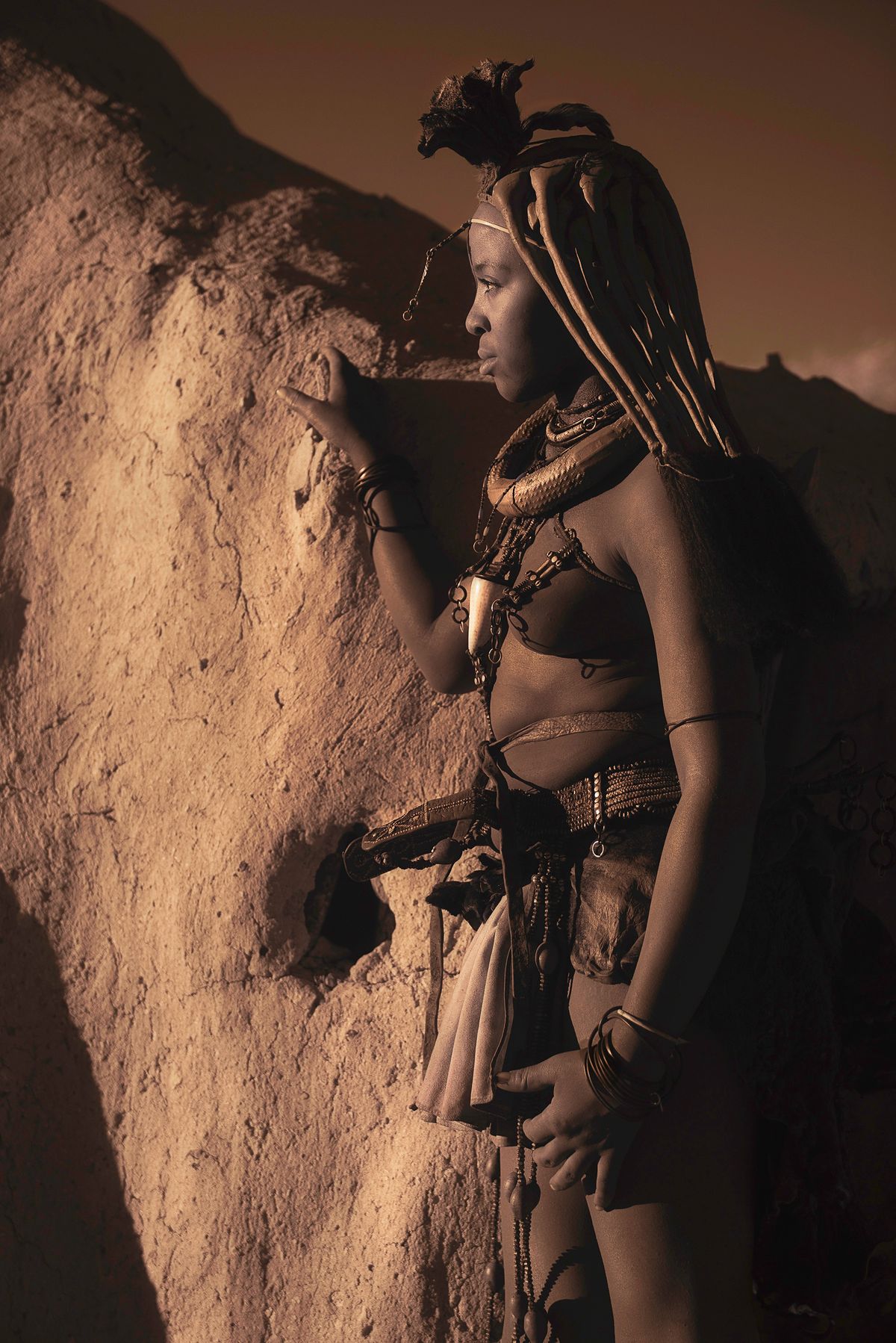 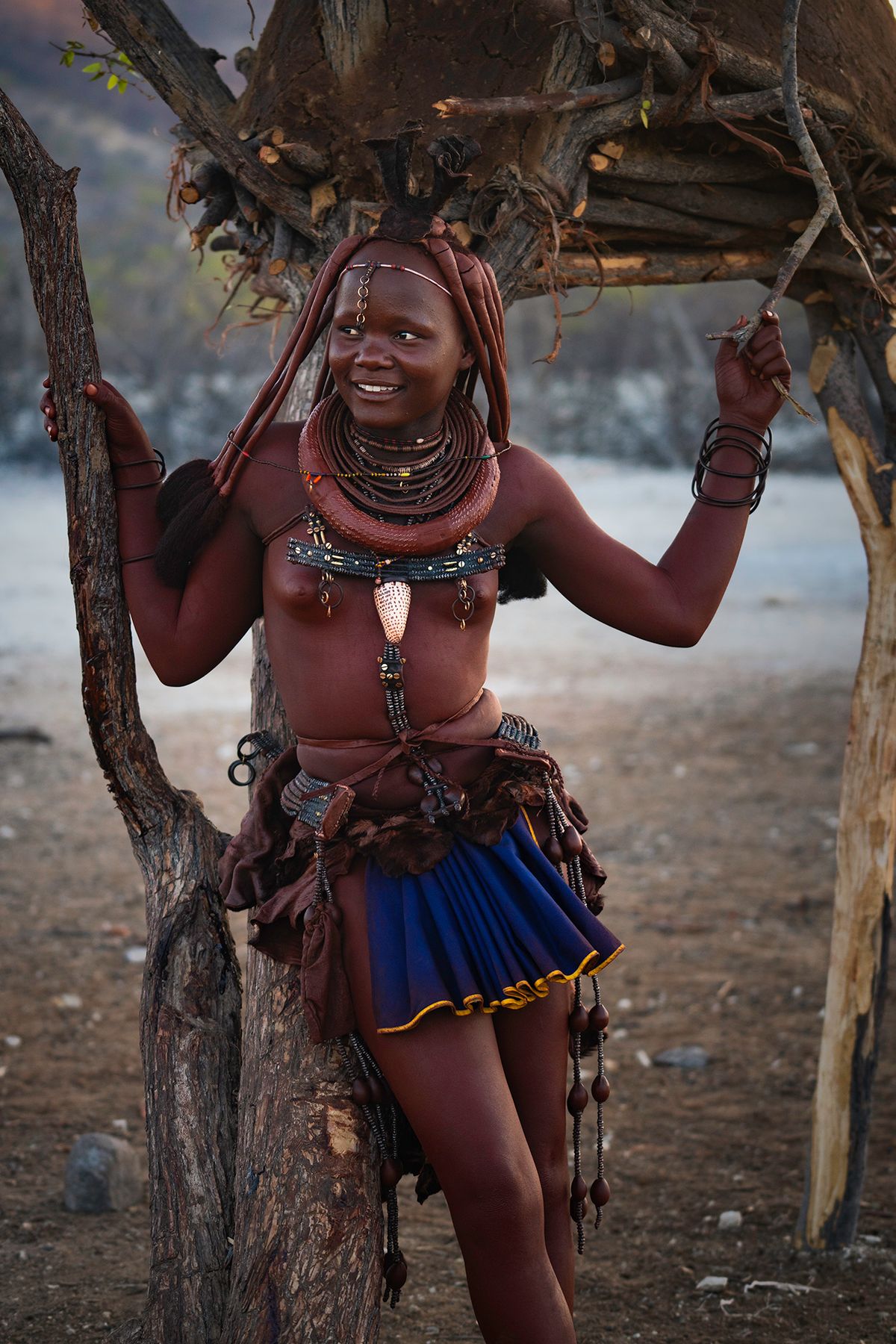 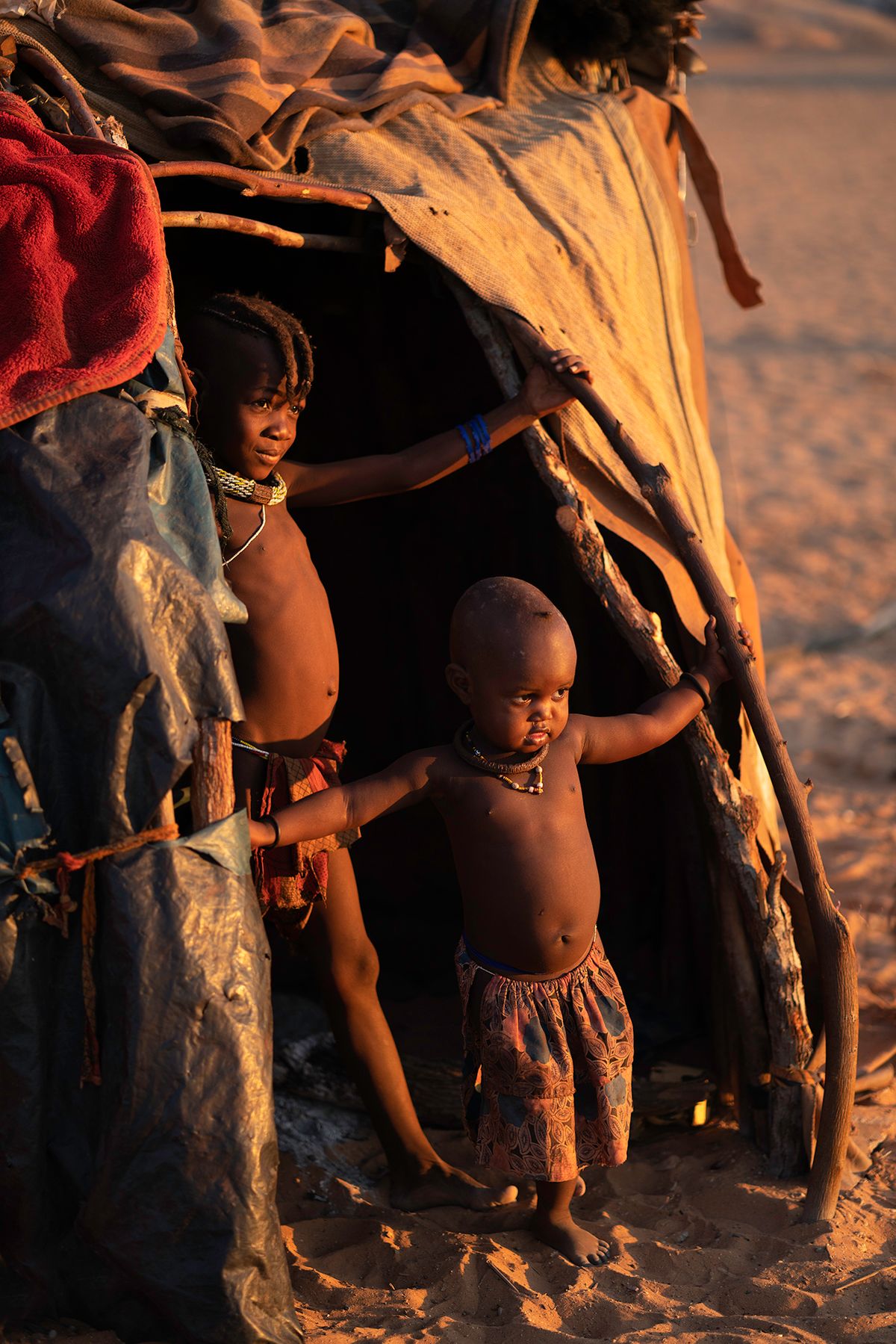 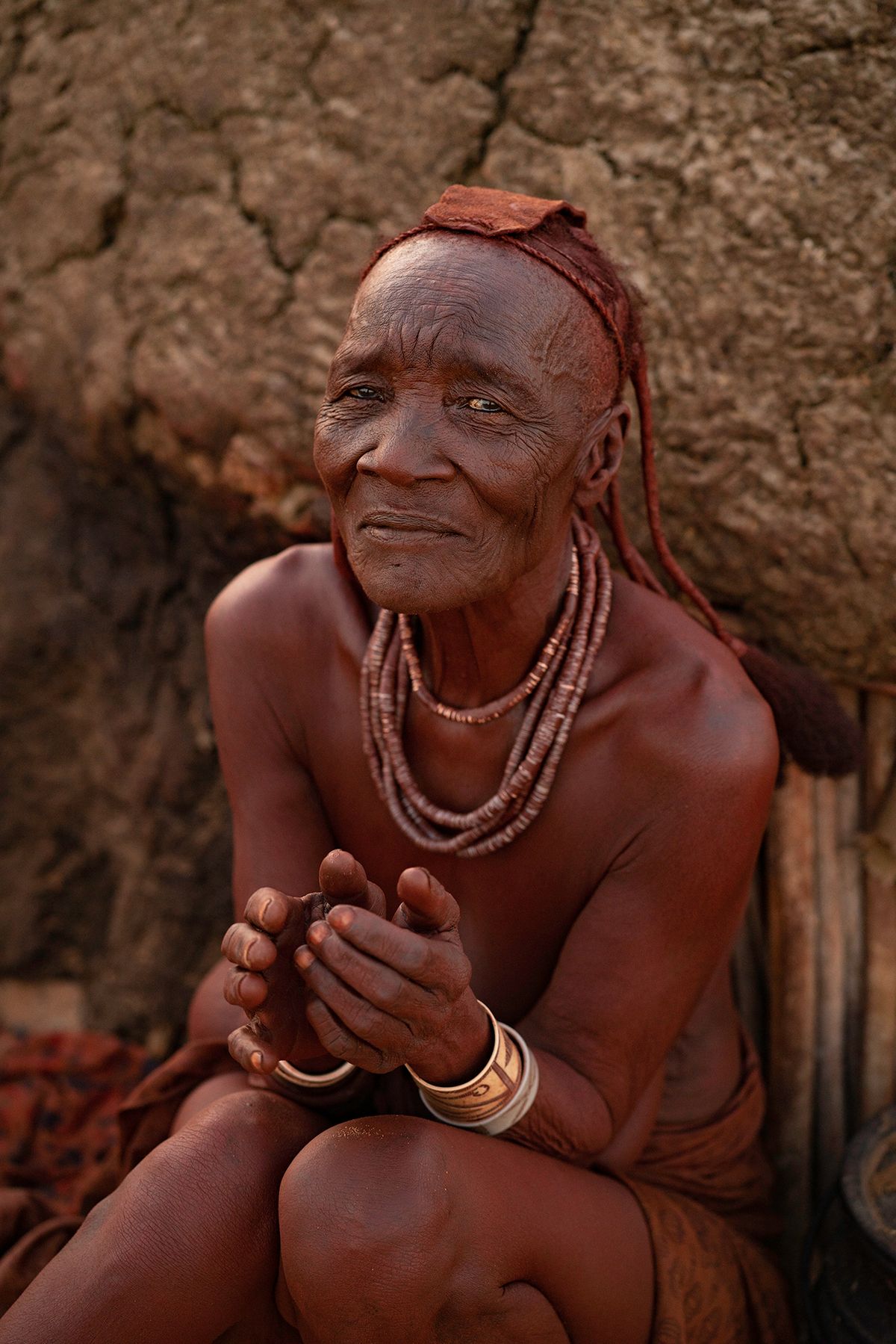 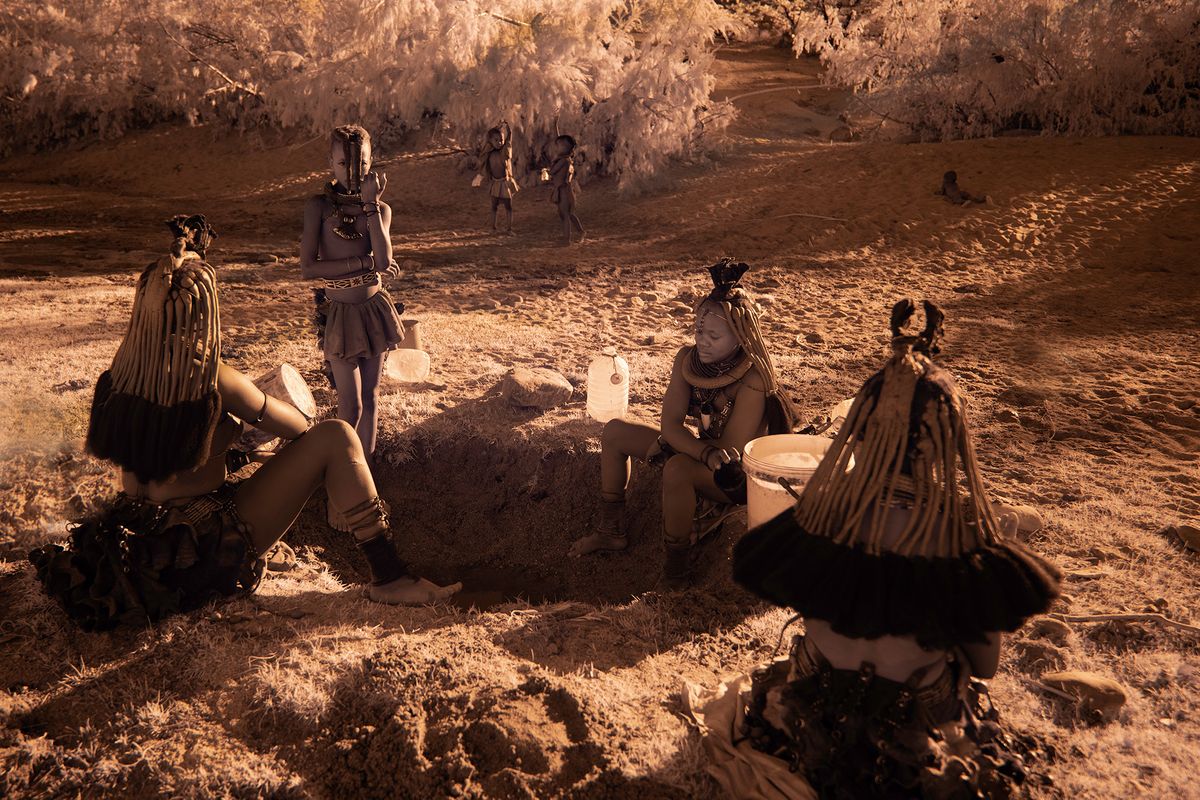 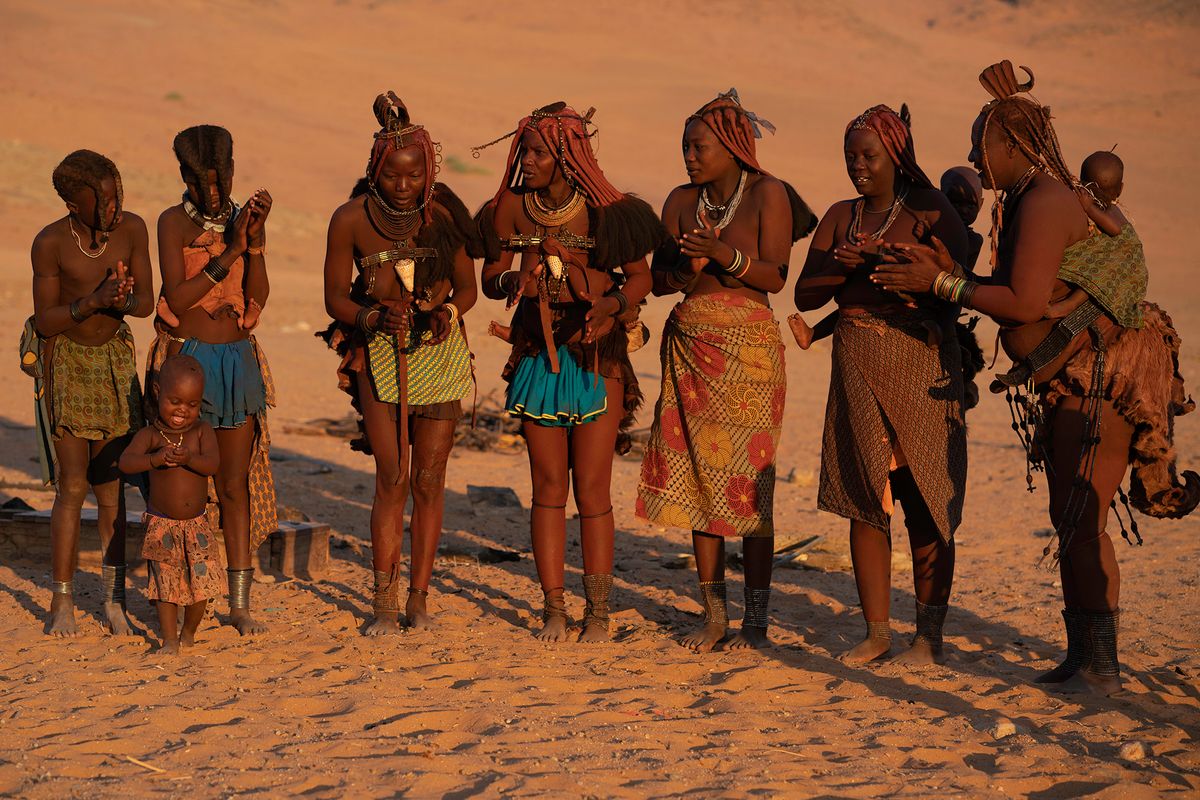 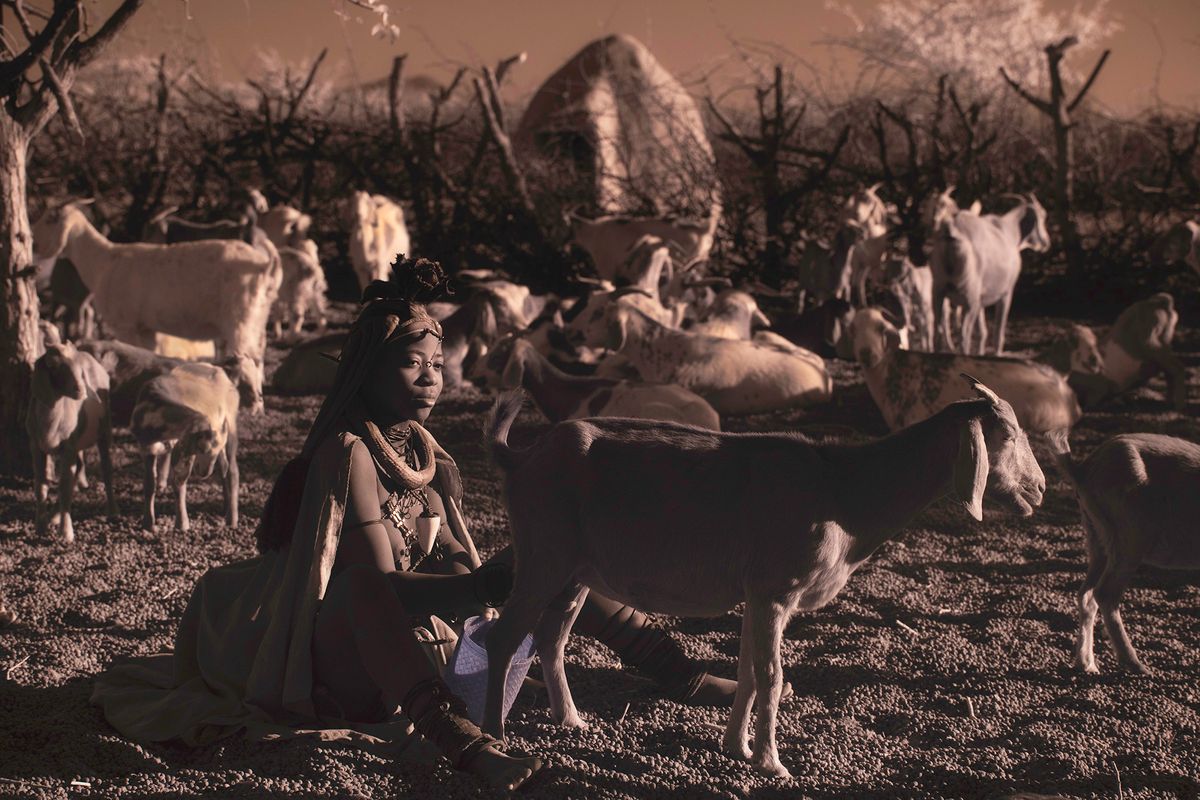 The Himba of Namibia

The Himba are a semi-nomadic people that live in one of the most extreme environments on earth, the deserts that border Namibia and Angola. As water is scarce they use a mixture of pastes on both their bodies and hair. These pastes blend the aromatic resin of the omazumba shrub and animal fat and ground red pigmented stone. This Otjize paste gives the women's skin and hair a distinctive red glow which symbolizes both blood and the earth's rich red color. For Himba women, her hair is her power. Hair is also seen as a symbol of fertility amongst the Himba community where thick braids and lustrous hair indicates a women’s ability to bear healthy children. Women who have been married for about a year, or have had a child, wear an ornate headpiece called the Erembe, sculpted from sheep or goatskin, with many streams of braided hair, coloured and shaped with ‘otjize’ paste. They will also be given a necklace that incorporates a cone shell, known locally as Ohumba, which is also considered a symbol of fertility. Teenage girls wear braid strands or dreadlocked hair that hangs over their faces. Doing this symbolizes that they’ve entered into puberty.For example, a young girl who hasn’t reached puberty yet (pictured above), will display two braids at the front of her head until she reaches puberty. If a girl is a twin, though, then she will wear only one single braid. Married women and new mothers wear Erembe headdresses made from animal skin. Young women who are ready for marriage tie their dreadlocks to reveal their faces.

Unmarried men wear a single braid to show their status. Once they get married, they cover their heads never to unveil them in public again.

Hairstyles play a significant role within the Himba community and reflect marital status, age, wealth, and rank within the group. Hair braiding is a communal activity with the range of styles differing from tribe to tribe. Close relatives spend hours creating elaborate and socially symbolic hairstyles. The braids they create are often lengthened by including bits of woven hay, goat hair and artificial hair extensions.

They are predominantly cattle farmers, but also breed goats, sheep and concentrate on maize and millet crops. Such farming provides their milk, meat for the mainstay of their diet with supplement of cornmeal, maize, chicken, eggs, honey and wild herbs. Extended family members live in an onganda or homestead. This is typically a circle of huts and working shelters around a sacred ancestral fire or okuruwo. The sacred livestock live within a central closure or Kraal and represents ”proper relations between ancestor and human” and the sacred fire represents ancestral protection.

Labor intensive day to day tasks are carried out by the Himba women and girls. These include carrying water, plastering the mopane wooden homes with red clay soil bound by cow manure, looking after the calabash vines, making their clothing and jewellery. They’re also responsible for milking the goats and cows and looking after the children… a task which is shared among the women.